Posted at 17:42h in Uncategorized by John
Share
Hi All,
I got some great comments and questions from the last Blog upload.  Some were asking for &ldquo;the point&rdquo; to be made clear.  Unfortunately we didn&rsquo;t post the actual paper written for and presented at the IECA Annual Conference in 2010.  Here is the entire paper as presented.
Read it here
The SUMMARY and CONCLUSIONS are that 4000 lbs/ac of the most commonly used Hydromulches did NOT inhibit the germination or establishment of three types of native grasses – as tested up in Northern California.  In fact, at 2000 lbs/ac rate we observed (did not measure it as that was beyond the scope of the trials) erosion on the slope, less vigor and stand density, and sediment plumes at the toe of the slopes tested.  With the heavier applications there was no visible erosion or sedimentation.
During my trainings and travels throughout the years many people have questioned or commented on the perceived fact that BFMs were NOT good for grass establishment.  This was especially true when Earth Guard first came out and it was observed that the &ldquo;spray-on blanket&rdquo; formed a rather rigid shell over the soil.  Not sure exactly how the rumor, (or is it factual?), got started, but none-the-less, the rumor was that BFMs when applied at the recommended rate of 4000 lbs/ac could/would stifle seedling germination.
Now let me point out that besides the replicated plots testing hydromulches, we also built one plot with a 2&rdquo; thick Compost Blanket.  Just like the other plots we prepped the soil, added seed (20#/ac rate), added mychorrizae (AM 120 at 20#/ac rate) THEN cover with compost.  We did this on Friday and on Saturday a friend asked if I would be stifling the seed by covering it with 2&rdquo; of compost?  Hmmm, I worried about this all night.
The next day I carefully divided the COMPOST PLOT in half and left one half with seed under and carefully raked some seed into the upper surface on the other half.
Now, look at the picture below showing the Compost Blanket Plot.
It is the one that is so lush and vigorous!!  Also, I cannot ascertain any difference between the seed-under and seed-on-top treatments.  Hmmmm??  Compost doesn&rsquo;t behave like wood mulch AT ALL.  It doesn&rsquo;t wash away, it doesn&rsquo;t erode, it doesn&rsquo;t stifle growth.  Oh, it does&rsquo;t release N to surrounding water ways.  Hmmmm? 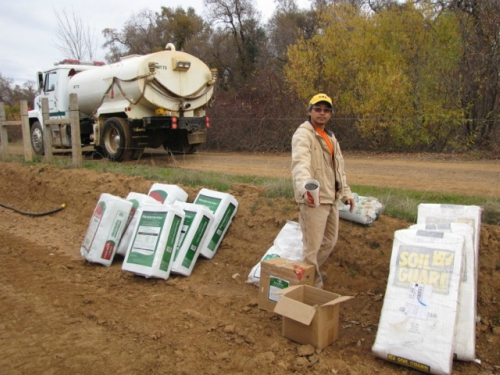 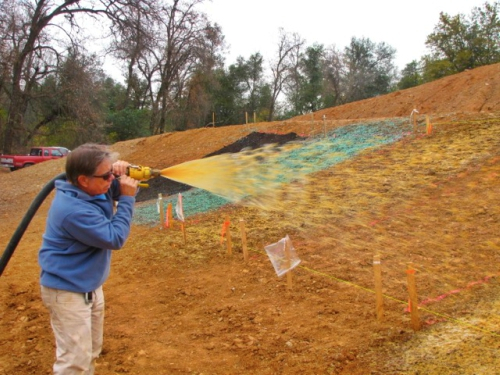 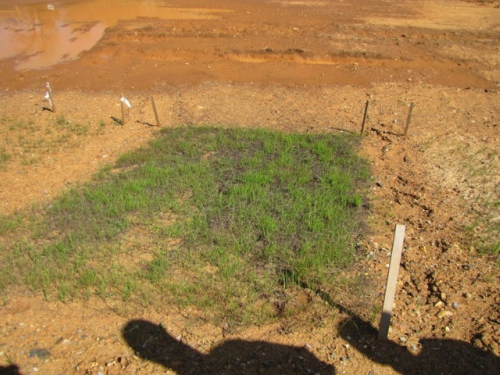