GEOMORPHIC SETTING: Buckhorn Mountain is an exposed decomposed granite batholith, which separates Shasta and Trinity Counties in NW California.  Highway 299 W traverses Buckhorn Mountain for almost 15 miles over steep mountainous terrain, elevations of 1000 ft to 3000ft at the summit.  The Shasta Bally Batholith granitics have a high percentage of biotite and mica- type minerals that weather easily. Weathering is extensive because the batholith is deeply fractured, thus allowing the intrusion of water.

SITE CONDITIONS AND PROBLEMS: Hwy 299 is the main east/west route from Redding in the northern Central Valley to the Eureka in the North Coast, yet the terrain, erosivity, and environmental concerns make highway construction (straightening and widening) extremely challenging.  As of 2010 the CA Construction General Permit (in compliance with the Clean Water Act) became very stringent requiring all new construction to be &ldquo;stabilized&rdquo; before construction and permit coverage is considered &ldquo;completed&rdquo;.  Historically, steep cutslopes in these decomposed granites (DG) have been extremely difficult to vegetate and the bare reveling cutslopes can be a chronic source sediment.  The challenges to establishing vegetation are many –

The region can experience 50 inches of rain in the winter followed by six months of no precipitation at all and summer temperatures can often exceed 100 degrees for weeks on end.

Soil texture and composition are other impediments to stabilization. The decomposed granite parent material weathers rapidly to a sandy-silt textured soil that is extremely erosive. The soils derived from the Shasta Bally Batholith are within the Hydrologic Soil Group A, based on high permeability, and have been determined to be some of the most erosive in the nation.

On exposed cut slopes competent appearing bedrock quickly decomposes and ravels when exposed to moisture and freeze-thaw cycles. The soils resulting from these weathering processes are droughty. The water holding capacity and organic content are also very low, therefore these soils are difficult to re-vegetate.

These decomposed granite (DG) soils in upslope, undisturbed areas have extremely high infiltration rates and permeability. Therefore. the mountain has significant amounts of groundwater within. This presents another erosion mechanism that is especially problematic on steep highway cuts and fills, namely, exfiltration or &ldquo;seepage erosion.&rdquo; This often occurs when the slope face intercepts the groundwater table.

TREATMENT OBJECTIVES AND CONSIDERATIONS: The main goal was to test the viability of constructing a stepped highway cut and to conduct field trials for revegetation strategies.  Stepped slopes control erosion by breaking up the slope length &ndash; reducing the volume and velocity of stormwater runoff. It was hoped that the steps would also promote vegetative cover by providing a stable substrate while capturing and retaining loose soil and moisture. 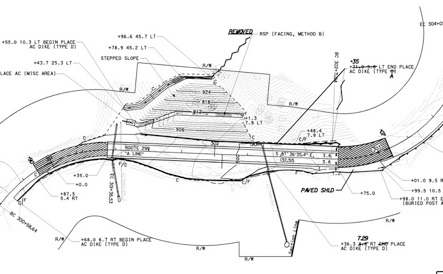 There were no extraordinary obstacles.  There was a common false belief that mountainous, high elevations were not good locations for willow.  We had to point out that Salix sps. often play the role of pioneering species, coming into an area naturally after fires and landslides.  Then naturally-occurring plants in the general vicinity were discovered and pointed out.

This stepped cut slope is currently well vegetated and has remained stable for 10 years, since the first winter failure which was stabilized permanently with willow stakes.  These techniques may prove to be the only feasible way to comply with the new California General Construction Permit.  The site has required little to no maintenance since the first winter. 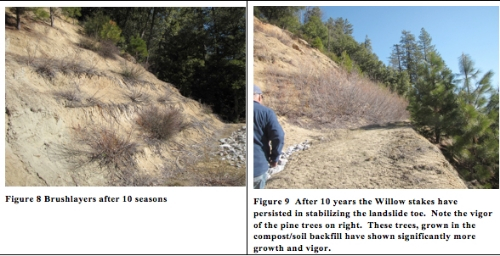 Stepped slopes should be considered when steep, highly erosive cutslopes are difficult to stabilize.  The new Clean Water Act regulations will make it extremely difficult for Highway or County Road Department to construct slopes that are chronic sources of sedimentation.  Therefore these steep slopes with adverse soils will require extra engineering and earthwork techniques to ensure vegetation establishment.

Backfilling the steps resulted in less erosion and much better plant establishment.  Another important lesson learned was adding Certified Compost and Mycorrhizae to the steps and planting basins.  It was discovered that the steps could be cost-effectively constructed, then backfilled with compost/soil/mycorrhizae admixture as the slope was being built.  It was expensive to cut the benches then go back and fill in the steps.  Better to let the heavy equipment complete both tasks simultaneously.

The use of live stakes to buttress landslide material was also an important lesson.

***For More Case Studies like the one referenced above please check out our E-Book at www.springer.com for purchasing today! A great tool in visualizing which techniques work best for certain contiditons!***

Any other questions, please feel free to write us at – info@salixaec.com !