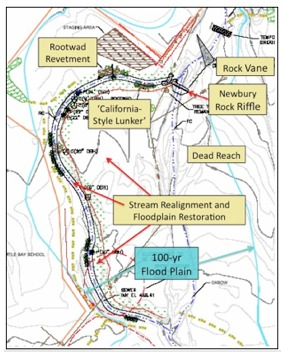 GEOMORPHIC SETTING: Sulphur Creek is a small, seasonal tributary stream to the Sacramento River. The watershed comprises approximately 3,000-ac with 7-mile stream length. The Sulphur Creek Watershed Analysis and Action Plan (SCWAAP), 1996, documented that the lower 2 miles of Creek can provide valuable salmonid spawning and rearing habitat if stream form and function can be restored.

SITE CONDITIONS PROBLEMS: The entire watershed, especially the in-stream sections, has been AND severely impacted by hydraulic mining and dredger mining in circa 1800&rsquo;s and gravel mining and road/highway building in the early-mid 1900s (see Figure 20.1) Lower Sulphur Creek (approximately 1 mile) runs through the Redding Arboretum.  This section had been dredged for gold (circa 1850s and 1920s) and some of the dredger piles had been subsequently mined for gravel (circa 1930-1950) thereby removing the gravel-sized substrate from the stream system and leaving cobble- and small boulder-sized piles of rock in the stream and flood plain.  A very significant land use impact occurred in 1934 when Highway 273 was build.  The new box culvert diverted the stream out of its&rsquo; historic channel and into the adjoining oak/savannah woodland.

Prior to restoration the stream in this reach is severely aggraded.  The stream gradient in this lower reach is very low &ndash; an ancient alluvial fan &ndash; therefore the streams ability to transport sediment and bedload is low.  The historic land uses have exacerbated this problem because the stream has been diverted out of its original channel by the upstream highway box culvert and it has been diverted around and through the gravel mining tailings.  Early gold mining &ldquo;turned the channel upside-down&rdquo; then gravel mining in the mid 1900s removed the gravel-sized alluvium.  Subsequently, the creek was diverted into  modified dredger areas.  In summary, the pre-restoration condition was characterized by a channel with a convex-up stream bottom, choked with large cobble, severe bank erosion, and little to no bank vegetation.  One 1000-ft section of the stream was nicknamed &ldquo;the dead reach&rdquo; for all the young escaping salmonid frye that died as the stream dried up (went subsurface) episodically (see Figure 20.2).

The primary objective for improving stream function was to re-align and mimic it&rsquo;s historic plan form while excavating the excess bedload material.  The secondary goal was to increase instream and riparian habitat.  The plan for fisheries improvement was threefold: 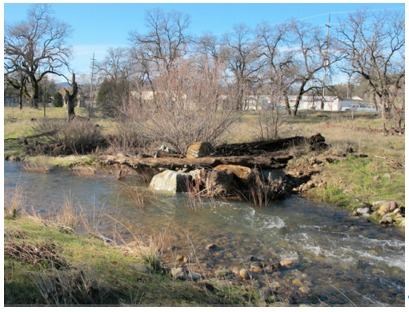 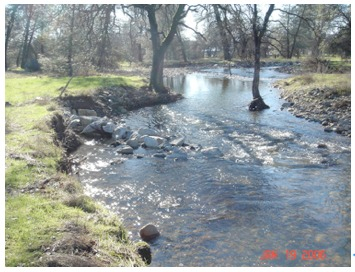 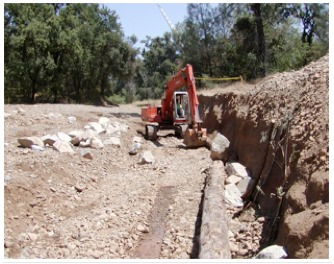 The biggest obstacle to this project was the permitting process. The CEQA rules and guidelines were applied to this project as if it was a development instead of a self-mitigating restoration.  All parties, the City of Redding and SWAG were inexperienced, therefore it took about 2 years and almost &frac12; of the restoration / implementation budget to permit the project.  Eventually SWAG had to complete City / FEMA Flood Map revisions even though the restoration involved removing tons of gravel tailings from the floodplain.

Urban stream restoration activities seem to make regional flood planners nervous &ndash; unfortunately many commonly-used tools such as HEC-RAS do not accurately reflect the impacts of localized activities such as willow planting, rootwad / large woody material placement, or redirective methods such as rock vanes.  HEC-RAS assumes that the channel bottom is essentially &ldquo;fixed&rdquo; while the restorationist wants scour pools, riffles etc.  The localized scour and low flow incisions quite often compensate for placing some material in the floodplain.

Secondarily, State and Federal laws, which are interpreted and enforced by inexperienced regulators, is extremely problematic.  For example, at one time a State Water Quality regulator advised the project supervisor to put silt fences in the stream and to line the channel bottom with erosion control mats.  The regulator apparently failed to understand the nature of restoring aquatic and salmonid habitat.  Future stream restoration projects which were regulated by State and Federal Agency staff familiar with, and supportive of, restoration activities went much smoother and resulted in maximum ecosystem benefits.

The Lower Sulfur Creek project is relatively complex and required careful co-ordination among its different elements and components.  The system performed well during and after intense rainstorms and high velocity stream flows following construction.  In spite of several instances of high water the protective structures and vegetation stayed in place and displaced erosive, high velocity flows away from the stream bank while preventing further erosion of the stream bank.  Low flows are now diverted to the restored channel by a Newbury Rock Riffle on left diverts low flows to restored channel (see Figure 20.8)..  Vegetation established well both atop the flood terrace and near the water&rsquo;s edge.  Channel degradation appears to have been arrested and sediment is being flushed through the creek to the Sacramento River.  The salmonid fish habitat has been restored and frye are no longer trapped during low flows which are now diverted to the restored channel.

The restoration of lower Sulfur Creek required the use of heavy equip-ment for restoration. The idea that heavy equipment could be used in or near seasonally dry or flowing streams, by skilled operators and careful planning was a paradigm shift that was achieved by tactful communication, frequent demonstrations, and performance monitoring.  The fact that the Salmonid species returned was definitely beneficial.

One very important method (BMP) was developed and demonstrated for working in seasonally dry gravel-bedded streams, namely &ldquo;Washing of Fines.&rdquo;  Running heavy equip-ment in a stream channel during the dry season will ultimately bring the finer sand and silt particles to the surface.  These &lsquo;fines&rdquo; can cause water quality exceedance when the first winter storms come. 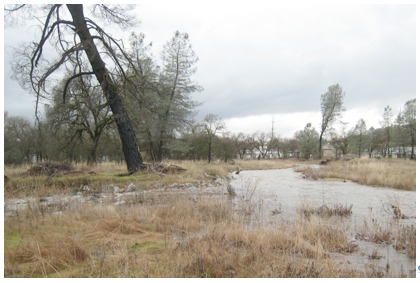 Washing fines is an &ldquo;in-channel&rdquo; sediment control method which uses water, either from a water truck or hydrant, to wash any stream fines, brought to the surface of the channel bed during restoration, back into the deep interstitial spaces of the gravel and cobbles, leaving clean cobble and gravel on the bed surface (see Figure 20.9).

SWAG monitored the stream turbidity during the first precipitation events resulting in stream flow.  The results were astonishing because the practice of &ldquo;washing fines&rdquo; most often resulted in reduced turbidity when comparing upstream and downstream values.  Sulphur Creek, being an urban stream with extensive upstream disturbances, could actually be &ldquo;cleaned up&rdquo; by Washing Fines in the restored construction reaches.

For more projects like this, please visit www.springer.com to order our E-Book today! Want something to scribble notes in? Don’t worry – we have a hard cover available as well!