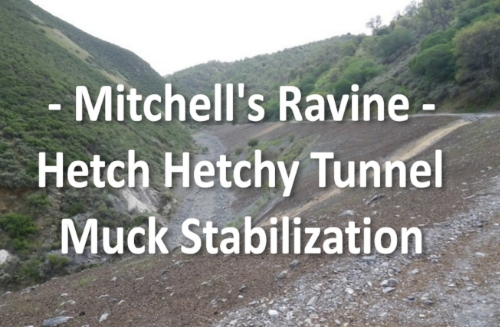 Mitchell’s Ravine is (was) a tunnel muck site – a legacy of the  Hetch Hetchy Aqueduct from 1938. The water tunnel is about 600′ under ground at this site!  San Francisco PUC-Hetch Hetchy and CA State Parks OHV Division, in conjunction with the RWQCB, were responsible for the collaborative mitigation/reclamation work.  The restoration plan for the 4+ acre site restoration was designed by John McCullah, geomorphologist and CPESC, Salix Applied Earthcare and engineering was completed by Fall Creek Engineering.  Neal Youngblood, Geologist Redwood National Park, provided invaluable expertise since this job was much like removing abandoned logging roads and landings.  Mike Vroman, Hetch Hetchy Right-of-Way Maintenance Manager, provided project oversight.

The waste pile, once entirely filling over 800-feet of the  “Ravine”, has eroded episodically for over the last 70 years.  The eroded gravel-sized sediment has caused impacts, such as aggradation and erosion, downstream in downstream Mitchell’s Ravine and Corral Hollow Creek. At least half of the “spoils” have eroded and moved downstream – some channel reaches have ‘aggraded’ by over 9 feet!  The restoration of the channel downstream is a story to be told in another blog, Stay Tuned!
The stabilization of the remaining 20-30,000 CY was done onsite using “Landform Grading” strategies.  A 6-foot high rock toe wall was engineered for the left descending bank of the channel (approx. 800 feet) then the spoil material was placed above forming slopes that mimic the natural terrain and geomorphology.  Two natural drainages were continued through the “fill slopes”.  See;  “Landforming: An Environmental Approach to Hillside Development, Mine Reclamation and Watershed Restoration”, Horst J. Schor, Donald H. Gray, John Wiley & Sons, 2007
Photos 1 and 2

Looking Downstream at the remnants of the Tunnel Muck site before restoration began, September 2012 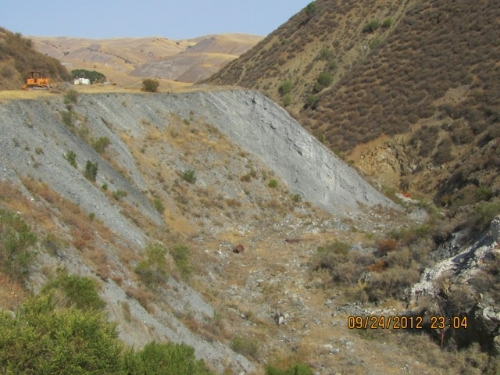 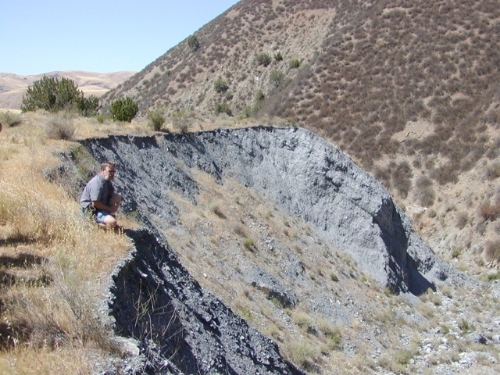 Over a mile of access road to the site was reconstructed and “outsloped” to restore hillslope drainage patterns.  This work is described in the ROAD and TRAIL DRAINAGE Chapter of the OHV BMP Manual (Go to WYD Navigation and Click on  WYD Files)

Photos 4.1 and 4.2 show the rock for Graded Stone Toe Protection was end dumped down to the bottom of the ravine.  Contractor had to avoid Elderberries and provide dust control. 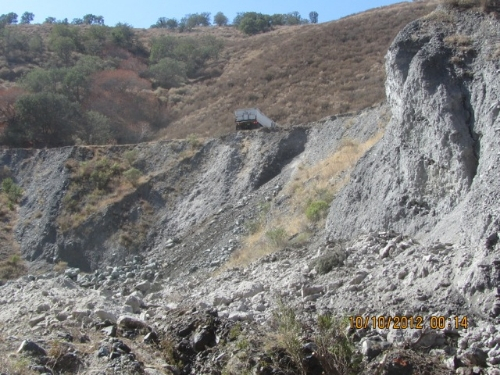 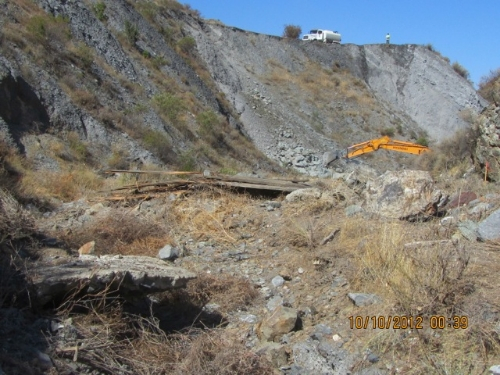 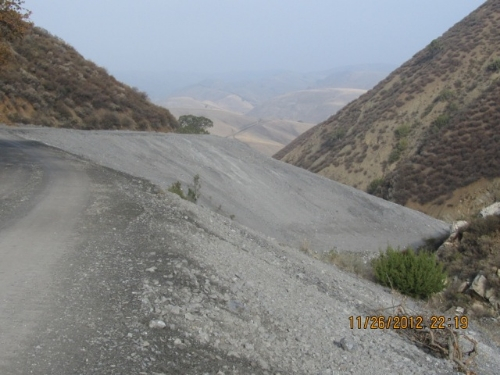 Even Caltrans Division of Landscape Architecture (see www.dot.ca.gov/hq/LandArch/ec/earthwork/contour_grading_rounding.htm) has “Contour Grading and Slope Rounding” in the Caltrans Erosion Control Toolbox, a one-stop reference for erosion control standards and guidance. The purpose of this site is to provide Caltrans Landscape Architects with a single location that provides access to the information necessary to design successful, effective and cost efficient erosion control treatments. 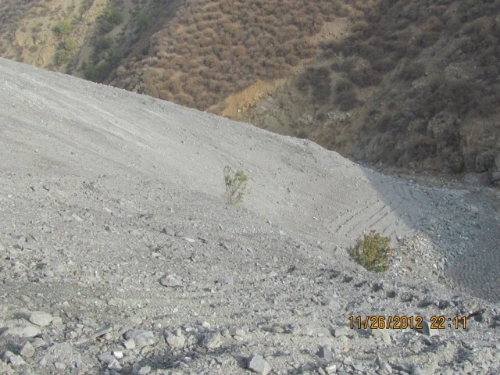 The Stormwater Pollution Prevention Plan called out Surface Roughening as the primary soil stabilization BMP in the event of a rainstorm occurring during construction.  Remember the slopes were constructed from relatively clean (it origins were 600′ in the earth!) and granular material.  The material, if roughened and de-compacted on the surface had infiltration rates exceeding 1.25″ per hour.  The probability that a precipitation event would occur that would exceed the infiltration rate was highly unlikely.  The QSD/CPESC who developed this project is proud to announce that NO silt fence was used or needed on this project!  However, some fiber rolls were used as barriers around the stockpiled compost, as per the California General Permit re: stockpiles. 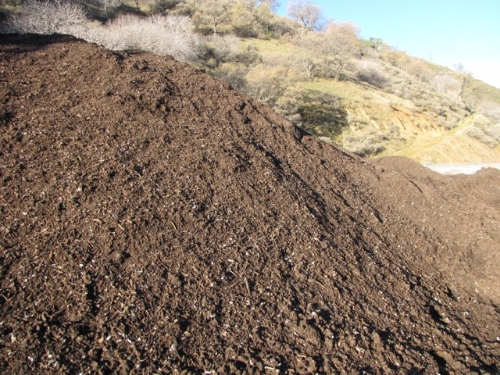 The 1100 CY of Certified California mulch used, was specially specified to have 50% moderate to large (3/8” to 3/4”) gradations. The compost Blanket (download FREE OHV BMP Manual at watchyourdirt.com/erosion-control-files/ and www.dot.ca.gov/hq/LandArch/ec/organics/compost_blanket.htm ), was applied by Phil Reiker – JET MULCH, INC. I can’t call this application an “Eco Blanket” because we didn’t use the Patented and TradeMarked tackifier called EcoBlend. The Compost Blanket was pneumatically applied approximately 1.5” think. Budgetary contraints played heavily when determining final application rates and use of amendments.

A specially developed CA Native seen mix was applied at 40# / acre. Half was applied by hand broadcasting to ensure complete coverage. Mychorrizae- AM120- was applied at 20-30# per acre and Biosol applied at 500# per acre. It took Phit Reiker and his Jet Mulch, Inc crew about 4-5 days to apply the compost. It could have gone faster but the compost got wet during an early fall rainstorm. Compost allowed to get too wet can get clumpy and result in more plugging up of the machine. 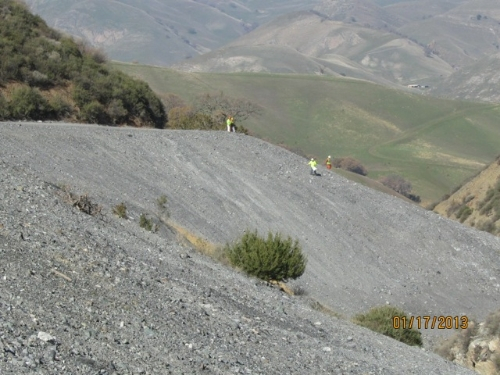 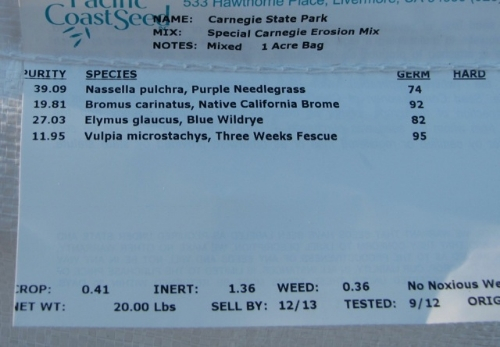 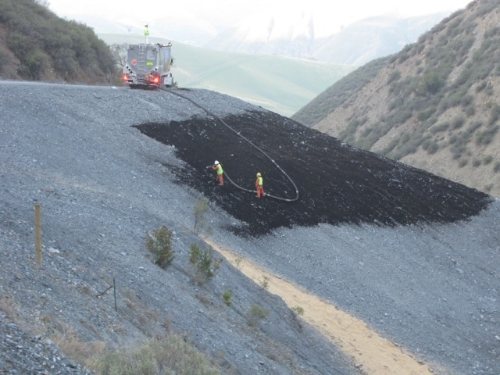 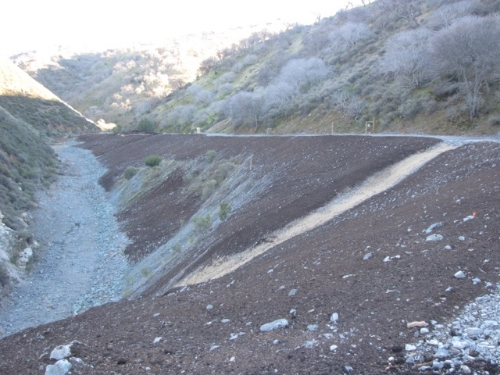 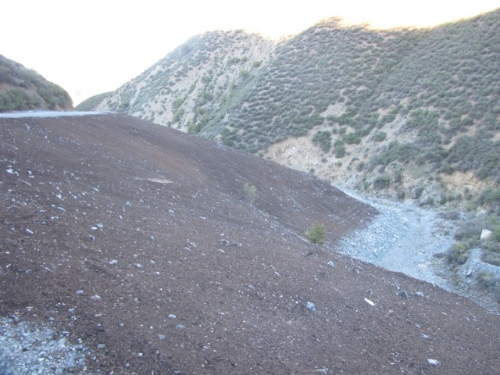 This Project will be featured in the May/June issue of “Land And Water Magazine.” Please contact that publication for even more information.

An upcoming Blog will describe the Natural Channel Design of the Lower Mitchell’s Ravine Stream Restoration and Habitat Enhancement Project.