Have you&rsquo;ll seen the Dirt Time in Alaska episodes 10, 11, and 12?  They were filmed in Fairbanks back in Spring of 2006 on the Chena River.

The three-day training workshop had one-day classroom instruction and two days with actual hands-on implementation.  It was sponsored by the USFWS to help landowners whom were having problems with accelerated shoreline erosion along the Chena River. A very proactive landowner, Jeff Harrison,  provided his property for the demonstration, equipment rental, and he purchased some of the materials. I got to operate a nice little John Deere Excavator which was a treat.

A few Erosion Control Manufacturers contributed to help making a Dirt Time episode. See /the-episodes/ . The class was based on the Environmentally-Sensitive Streambank Techniques outlined in recently published NCHRP Report 544.

The Lower Chena River is almost like a lake so the erosional forces at work involve wave action, primarily from the riverboats operating in the spring and summer, and to a lesser degree, ice from the spring breakup. Compounding the problem is urban development which had resulted in removal of the natural riprian vegetation.

The techniques we chose for the hands-on repair were:

See below Photos of Riverboat waves flowing perpendicular to shore! 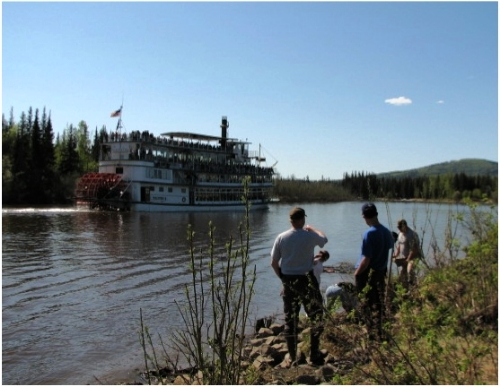 About 40 people attended the workshop, including members of USFWS, AK Department of Fish and Game, Alaska Department of Conservation, and USACE.  It was a wonderful spring day to work, in fact sunburn was a risk.  Most of the techniques we demonstrated could be constructed by hand labor but we did utilize the excavator to build a relatively-stable toe/terrace (dictated by water surface elevation at the time) on which to start the coir and soil bag constructions.  The Coir Rolls (and Bio D Blocks)  and the Soil Bags were designed to be the &ldquo;structural elements&rdquo; which will resist wave splash erosion.  The backfill with brushlayering  was intended to provide the gravity and reinforced (with branches, roots, coir tiebacks etc.) soil fill.  The Live Siltation is a &ldquo;modified brush layer&rdquo; which have the branches slanting upward more – designed to provide roughness during high water.

A problem we encountered was something I had never considered – seasonal permafrost. The wooden anchors needed for the Coir constructions could only be driven in about a foot before hitting complete and total resistence. By the end of the summer, the permafrost will have melted even more and the stakes are simply driven into mud! We decided to double up on the wooden stakes but the structural integrity really came from the brushlayering, tiebacks and the gravity of the fill. 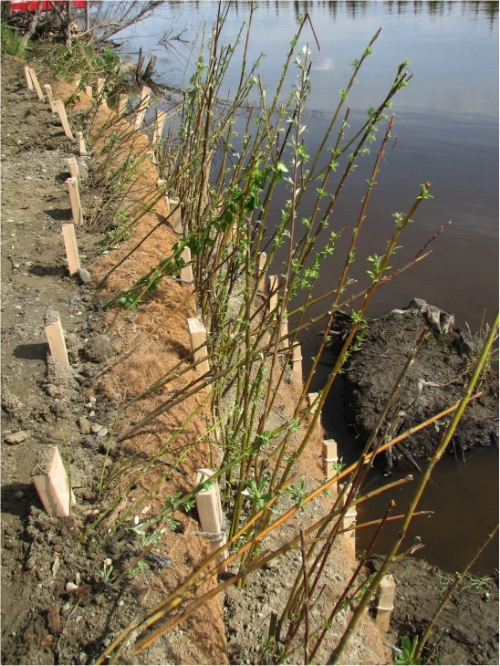 The Vegetated Soil Bags were geotextile bags filled with granular soil and organic (compost) matter. The patented element of this product is an approximately 4″ x 8″ heavy duty plastic plate with spiked on each side – intended to keep the bags from slipping when stacked upon each other. Again, we used willow brushlayering between each lift. 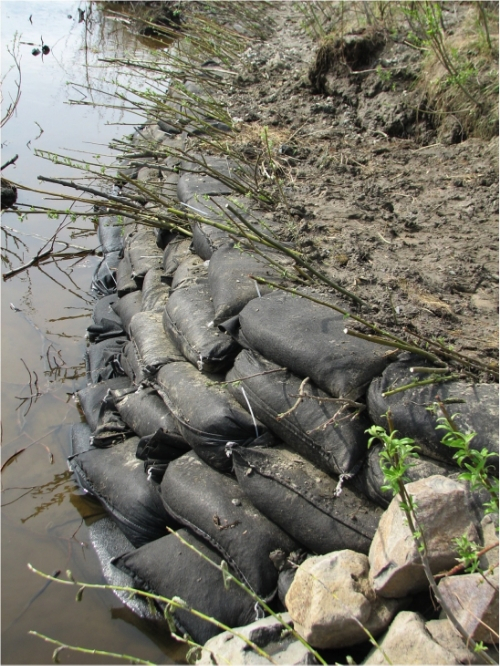 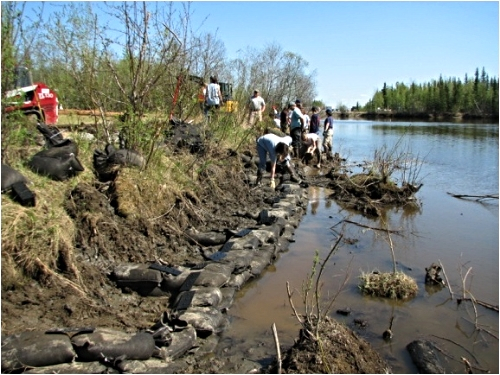 Interestingly, several years ago I heard rumors that these methods failed in the first year! Needless to say I was disappointed but hoped that the professionals in the area could look at the big picture and beneficially incorporate some of these techniques into more ‘rigid’ designs as needed.

However, I recently received a current photo of the site and GUESS WHAT? The streambank and the project, including the techniques, have performed magnificently! I don’t know how the rumors got started but the photos below show how well the site has performed. I called Jeff Harrison the other night and he verified that all the techniques we tried, with the exception of LWD anchored down with duckbills, have performed great! He reports that he had some 6-9″ rock left and placed it in a few places. He commented that in hind-sight, he would have “battered the coir walls back a bit” and while the soil bags have also “held up great but they are not as attractive.”

Picture below is of our partner in Dirt Time – James Swirsky filming an episode.

(More on James in Footnote) 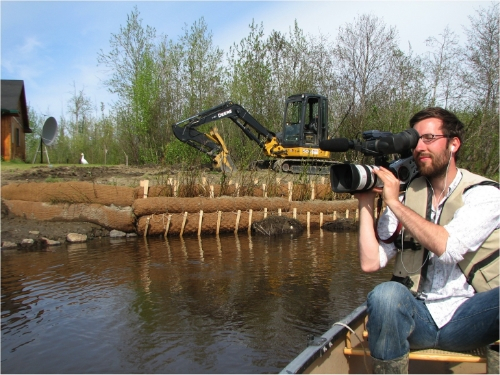 See the site photos taken 7 years later, July 16, 2013. Jeff reports that the willows have formed a hedge which he prunes. You can see in the closeups where he deposited some rock. Just think, after 7 years of wave splash and weather!! A disclaimer – Jeff reports that there has not been a huge ice breakup in several years but nothing can defend against that! 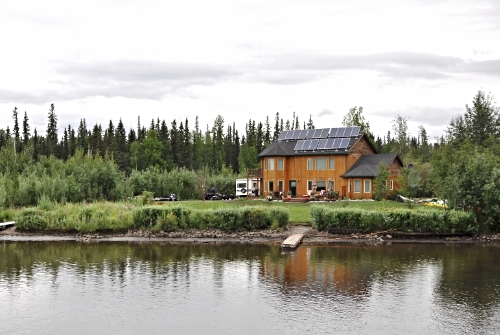 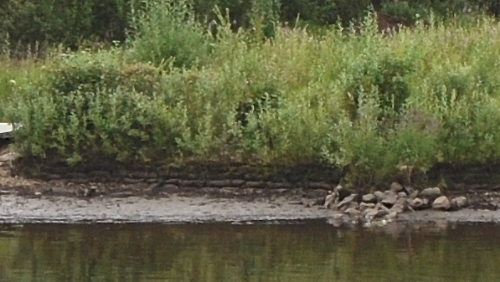 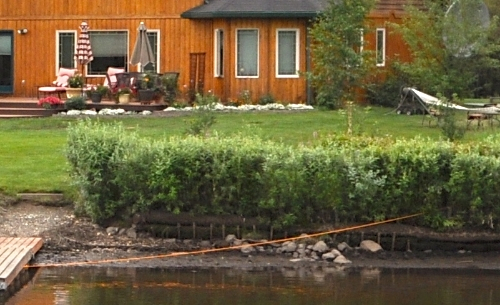 Footnote: James and I went on to film even MORE Dirt Time Episodes.

James Swirsky and Lisanne Pajot won a Sundance Film Festival Award for their Documentary film, Indie Game: The Movie in 2012!

Check it out at https://buy.indiegamethemovie.com.

And for more information on Our Chena River Bioengineering Project and Dirt Time episodes, please check us out on Facebook: https://www.facebook.com/WatchYourDirtTV

And visit our store at: https://watchyourdirt.bigcartel.com/