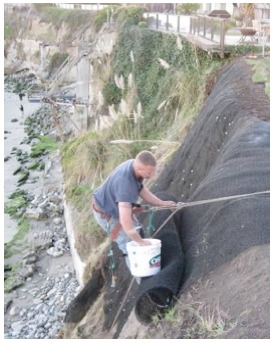 GEOMORPHIC SETTING:   Sea cliff subject to active erosion and periodic retreat.  The Opal Cliffs-Capitola reach is characterized by an irregular shoreline backed by cliffs ranging from 35 to 75 feet in height.  The coastal cliffs throughout most of the city of Santa Cruz and neighboring Capitola are composed of erodible sediments of the Purisma Formation (siltstone and sandstone) along with the Santa Cruz Mudstone.  These sedimentary rocks are often capped by 6 to 20 feet of unconsolidated marine and non-marine terrace deposits.  The horizon-tal bedrock stratigraphy is easily visible in exposed or bare sections of the cliffs.

SITE CONDITIONS AND PROBLEMS: The Opal Cliffs section of the coastline is at high risk from erosion, the narrow beaches provide little protection from wave attack at the base of the cliff.  Urbanization and house building at the cliff top causes further sub-aerial erosion threats, viz., concentrated runoff and subsurface seepage from streets, drains, downspouts, and excessive lawn watering.  The face of the cliff at the location of the residence was actively eroding and retreating (see Fig. 20.1).

TREATMENT OBJECTIVES AND CONSIDERATIONS: As a result of the high erosion risk from wave attack large sections of the sea cliff are protected by struc-tures including sea walls and rock revetments.  The base of the cliff at this location is protected by a sea wall and rock armor.  The main problem appeared to be erosion and shallow sloughing at the face of the bluff.  The goal was to arrest this erosion and stabilize the face.  Adjacent stable sections of the cliff were well vegetated.  If the face of the bluff was stabilized sufficiently this would allow the establishment of vegetation which in turn would help control erosion problems.  There was insufficient evidence of emergent seepage at the bluff face to warrant installation of horizontal drains (hydraugers) on the bluff face or a trench interceptor drain atop the bluff. 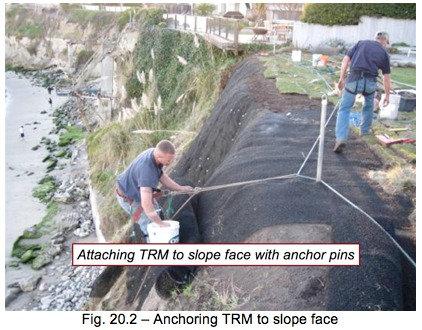 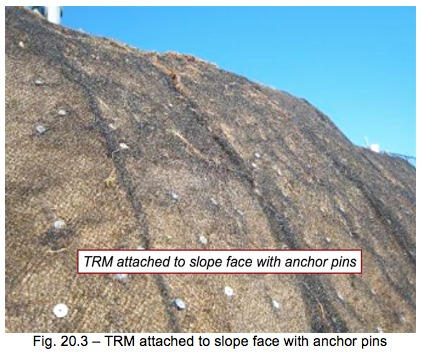 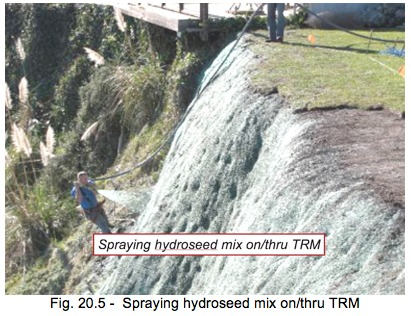 OBSTACLES TO IMPLEMENTATION: The main obstacle to implementation was the need to work on a near-vertical slope which required the use of ropes and slings.  A system was quickly developed, however, that overcame this challenge without the need for an elaborate scaffolding or support system.

PERFORMANCE EVALUATION: A vegetative cover was soon established that was initially held in place by the anchored TRM.  This provided enough time for the live stakes to root and gain a toe-hold on the steep slope.  Erosion and shallow sloughing on the face has been arrested (see Fig 20.6).  Only time will tell whether this treatment will suffice in the long run, or whether other measures such horizontal drains and/or an interceptor trench drain will be required.

This is another great chapter out of Bioengineering Case Studies . Please see to the previous link for information on ordering your today!