27 May Update From The Road… 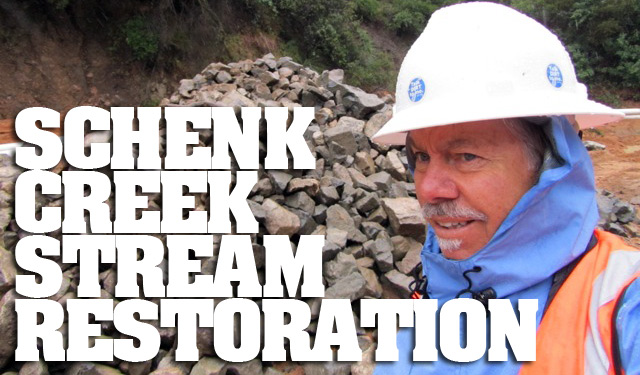 (note:  Part 1 of this project’s blog post can be found here)

Well we finished up the HWY 330 Schenk Creek Stream Restoration today.  The estimated 65,000 CY landslide from last winter has now been removed from the creek, and the highway stabilized and reopened.  Its been a rough several months for the drivers who commute from San Bernardino to Big Bear Mountain Resorts and a potentially rough time for very critical yellow-legged frog habitat downstream.  I believe that frog fate has been averted by the diligent and timely work of Caltrans and the other Resource Agencies involved, CDF&G, US Forest Service, US Army Corp of Engineers, and the US Fish and Wildlife Service

I pleased to say we got the work done (650 feet of channel) several days faster than I thought, but really experienced heavy equipment operators, once again, made the difference between a successful project and and “really great work”.  We placed over 500T of rock to make the “roughened channel”, engineered riffles, about 300 ft of Longitudinal Stone Toe w/ Live Siltation, and some other innovative “biotechnical soil stabilization techniques” – Brushlayering /w geogrids and Soil Flapping (with 700g/m2 coir netting).

The overall strategy I came up with was revealed by looking up and down stream to see how the stream, prior to the landslide, functioned naturally – I often refer to Proper Functioning Condition (PFC)-type qualitative analysis.  Then David Derrick and I both (at different times) identified some reference sites, showing that the stream utilized vegetated flood terraces (small because the canyon is steep and narrow) to store past sediment, brush and some large rock to dissipate energy.  Even though this stream is seasonally dry, the flora is so very diverse and Willow plays an important part – most of the historic terraces were “held together” by an old willow bush, but sycamore, bay, and poison oak also had a part. 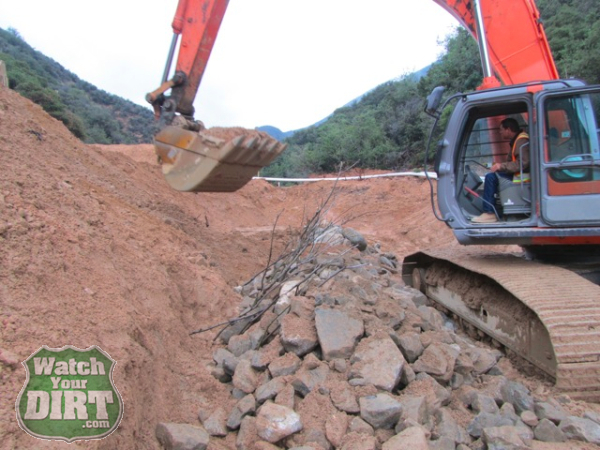 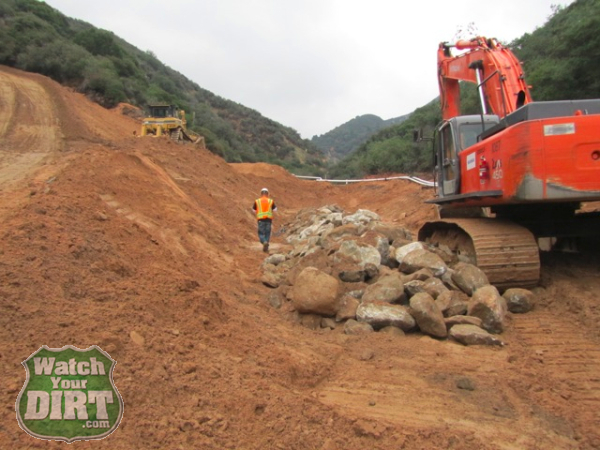 We also built a massive LST at the toe of the slide, great place for Live Siltation planted deep! 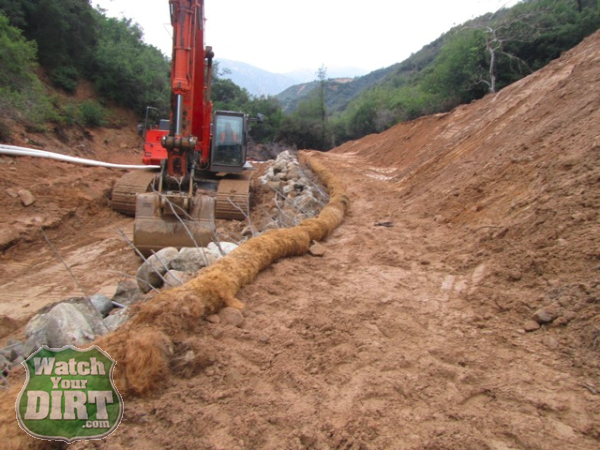 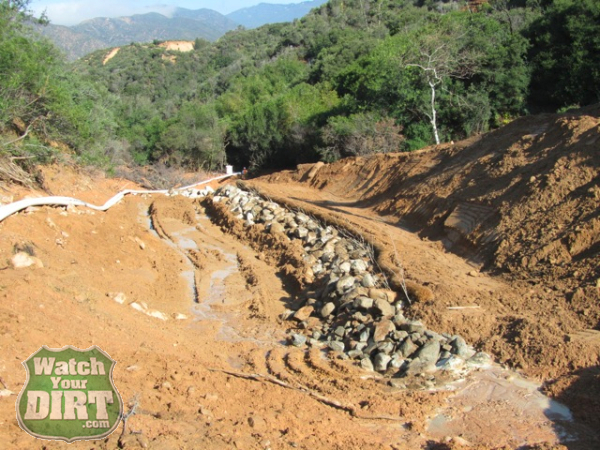 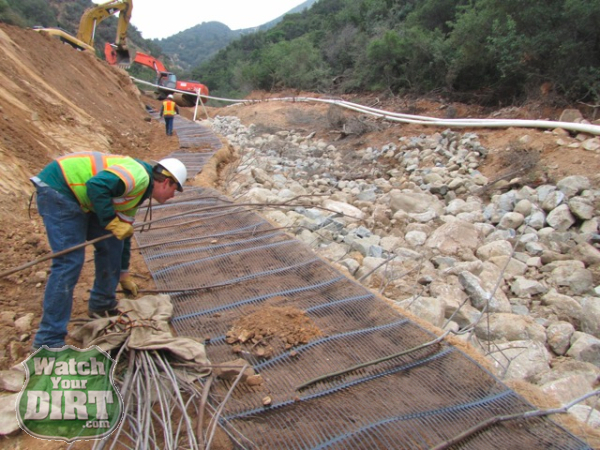 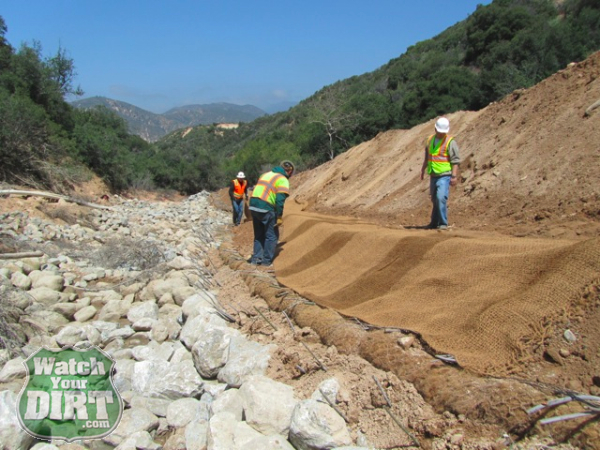 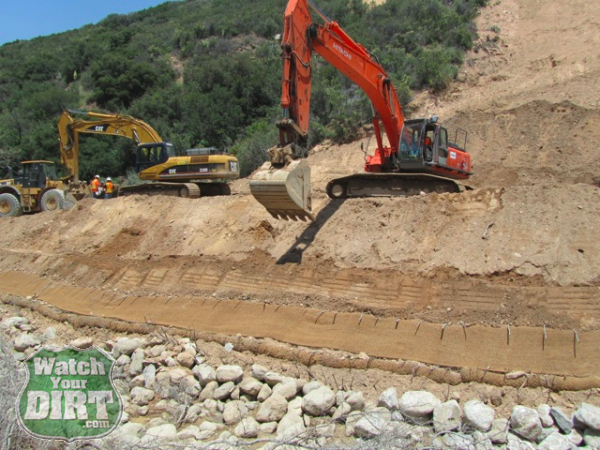 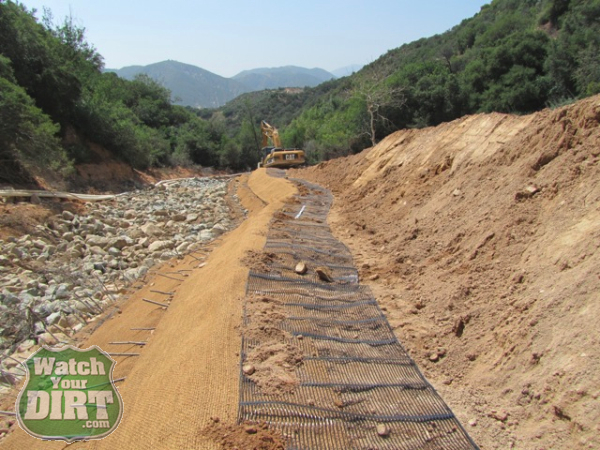 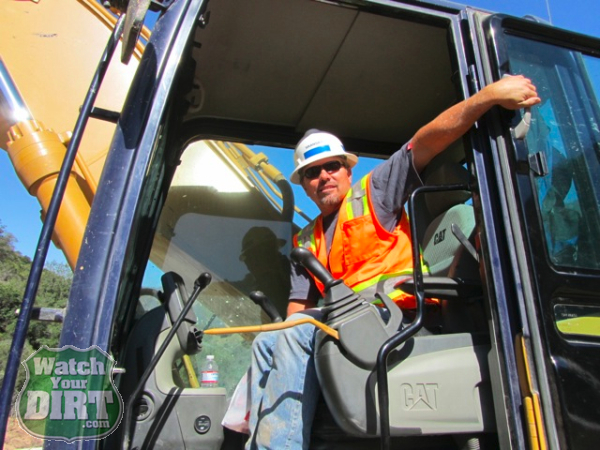 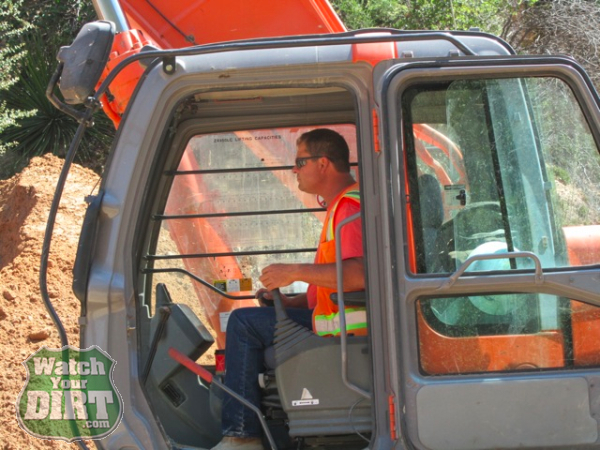 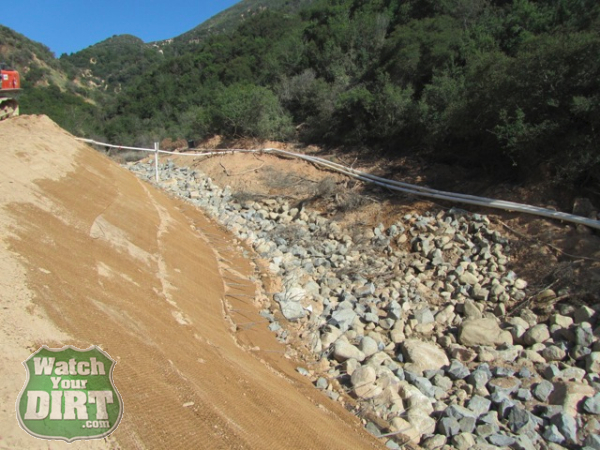 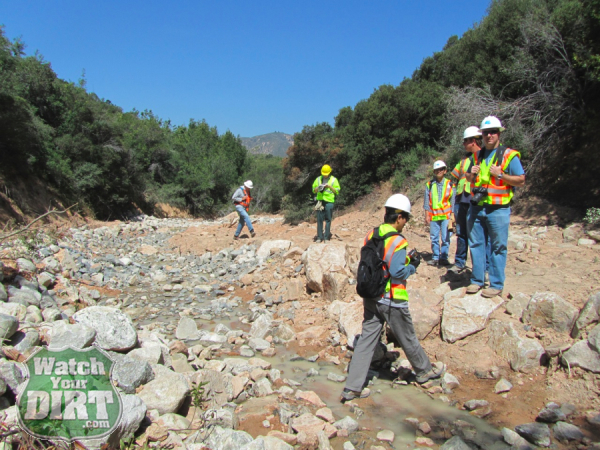 Yea!  We’re Done with the stream, now Caltrans has to remove the access road and apply erosion control – More on those topics later!

It just so happens that Caltrans Office of Landscape Architecture is rolling out a NEW course Advanced Sustainable Erosion Control – For &gt; 2:1 Slopes.  It will present NEW tools including the RECP Soil Frap you saw here, RECP Soil Wrap, Brushlayering, Stepped Slopes, and more.  Brent Hallock, Prof. CalPoly and myself are the instructors for this course being rolled out for Caltrans this June.  Contact Dennis Cadd for more info.

Concrete Wash-Out is Getting Easier…

In the U.S., almost 340 million cubic yards of ready-mixed concrete is used each year.   From a stormwater pollution and waste perspective, that results in nearly 300 million gallons of washwater and 2.5 million CY of concrete washout waste.

The estimated annual 34 million truck loads of ready-mix each generate approximately 1/16 CY of concrete material left on the chutes and use about 7 gal of washwater used to clean the chutes!  Besides the caustic and contaminated washwater, concrete also has contaminants such as Chromium VI (Erin Brockovich)!  This is why concrete curing compounds and the processes involving concrete finishing are so regulated by NPDES.  Construction of Highway Bridges over water are especially critical.

Those of you active in planning, designing and implementing SWPPPs know that there is a big emphasis lately on concrete washout.  At least that is true here in California.  If your project involves concrete, you better show in your SWPPP how the concrete washout is going to be handles.  Usually the BMPs involve a rather passive system of holding the washout until the water evaporates and then hauling the dried concrete to a proper facility for disposal or recycling.

The simplest BMP has been an above ground  “pond” built from straw bales and lined with 10 mil plastic. These use about 12 bales of straw and hold less than 3 CY of concrete waste.  There is also a “below ground” concrete waste trap, usually built for larger quantities of waste.  The important thing is the plastic lining so the highly alkaline slurry cannot leak into the stormwater.

Well recently some companies have offering full service concrete waste management.  For a fee the company will bring watertight, roll off containers to your construction site.  When necessary they can “vacuum off” the washwater.  At the project end they will remove the bins and recycle the waste.  Most importantly, the service provides manifests to the Construction Site Foreman ensuring the waste was properly disposed of.

As of this year, Caltrans has 4 generally approved BMPs or SSPs (Standard Special Provisions) for concrete waste.  These include above ground (straw bales and plastic), below ground, watertight bins, and the roll off management systems.

Tara and I recently visited our friends, Aubry and Wendell at California Paving Products, Anderson CA, to check out a new concrete washout device they have.  This new product will surely take the place of straw bales and plastic as an approved BMP.  The bags come pre-manufactured from heavy-duty polypropylene and they are lined with plastic.  They look very sturdy indeed with heavy-duty bands and handles for lifting when they are full.  To hold the bag open, a very simple frame was constructed from 2″ PVC pipe.

It appears that these “bags” hold about 2 CY of waste.  We were told they sell retail for about $75 each.  This is so much more cost-effective than straw bales and plastic when you consider the disposal costs and the reduced bulk ending up in a landfill.  Anybody out there experienced picking up a wet and moldy straw bale?  Anybody out there tried these guys??

We just want to take a quick moment to welcome to the site, all of the good folks at Caltrans.

Because of the ‘Vimeo’ video player service we use here at WatchYourDirt, Caltrans office computers were blocked from watching the videos and using the site to its full potential.

A big shout out and thank you must go to Greg Balzer in the office of Roadside Management and Landscape Architecture Standards for taking the initiative and getting WatchYourDirt unblocked for everyone at Caltrans.

Getting sites removed from a ‘blocked’ list is never an easy task, especially in an organization as large as Caltrans.  So we are very thankful to Greg and his efforts!!

Since the unblocking, some WatchYourDirt videos have already been referenced in Caltrans material, and we couldn’t be happier about it!

If you happen to be from another DOT or Government Organization and portions of this site are not available to you – in particular the video components – please give us a shout and we’ll see if we can work with you and your organization to see if we can open up the site.